54-46 means the 54 lose. Even casual sports fans get that there’s something wrong there. Anybody with basic math skills or possibly the entire population of 3 year olds who have casually watched Sesame Street would look at that and puzzle. Then you add in that the 54 represented the opinions of 90% of the country, and… they… lost! and it’s even more crazy making. But it goes further.  There’s an institutional problem here.

Yes, the drafters of the Constitution were very nobly interested in protecting the rights of minorities and that has been one of the things that made our democracy so great. It’s worked more in theory than in fact, but still, on paper (that paper called the Constitution) it’s still one of those things that Madison, Jefferson, Hamilton, Adams, etc. got right. But the inability of a majority to actually rule has reached a ridiculous state. The Senate is in a state of dysfunction that makes the Lohan family took like the Brady’s.

Despite broad support from the American public, the bipartisan Manchin-Toomey amendment to extend background checks died in the Senate, six ‘ayes’ short of the 60 votes needed to overcome a Republican filibuster. But party divisions were only one reason why the gun vote failed. More important was the institutional structure of the Senate itself, which by its very design (two senators per state) gives disproportionate representation and political power to small populations in large, rural states. 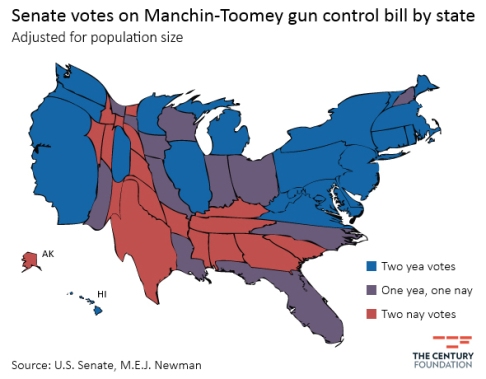 That map and Ezra Klein’s Wonkblog makes the case that the background check bill failed because “the Senate is wildly undemocratic.” The filibuster was not in the Constitution, it came about several decades later, but the idea of two senators per state,no matter how large or how small was part of the bicameral bargain hammered out over cheesesteaks in 1789. At that time Virginia, the most populous state was 12 times larger than Rhode Island, the smallest state. Today California is 66 times the size of Wyoming, but still have the same number of Senators! The Senate is 5 times less proportionate that it was at the founding.

Drill down into the numbers more and you have a mind boggling disproportionality of representation noted by Cohn and Kingsbury in the New Republic:

And the supporters’ majority was even bigger than it seems. If you assume, for sake of argument, each senator represents half of his or her state’s population, then senators voting for the bill represented about 194 million people, while the senators voting against the bill represented about 118 million people. That’s getting close to a two-thirds majority in favor of the measure.

And again, those are just the numbers representing representation. This doesn’t count that 46 Senators voted against something that majorities supported in their states. There is no poll that had ANY state underwater in backing the expanded background checks.

So there’s the practical everyday question of how do we overcome the gun lobby and the cowardice of so-called “representatives” to vote scared. As Gabby Giffords noted in her NY Times op-ed. these 46 Senators ran away from what they perceived as danger rather than doing what heroes do, what great Americans have always done and run towards it for the benefit of our fellow citizens.  2014 has to be a year when the cowards, the NRA toadies, are shown the door and people more dedicated to the will of the people (on ALL issues) are elected. But what can we do to make our government more representative on the macro level given the evolving disproportionate nature of our government today?

Is it enough to get money out of politics?  Would all 100 senators from all 50 states vote their constituents’ interests then? Maybe. But factionalism and regional interests that were a huge issue in 1790 have only been exacerbated by time. If Virginia had been 66 times larger than Rhode Island at that time their representatives in Philadelphia would have been insane to agree to such an equalization of their rights as 2 senators each and reliance on the population driven House of Representatives.  How do we evolve our system to better represent us?

To do nothing while others are in danger is not the American way.