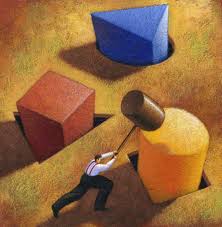 The modern conservative/authoritarian mind sees every problem as having to be conquered rather than negotiated. It’s a bully’s way of looking at the world – seeing people and things as having to be bent to their will rather than strategizing cooperation and mutual benefit. They project that everyone respects power above all, because they do. This mindset is rarely productive in personal relationships or government.

Even in the area of national defense where mindlessly throwing military might around is a well documented hubristic trap (see Vietnam or Iraq). The Bush/Cheney/Rumsfeld cabal knew what they had to do and, the means justifying the ends, they bent the intelligence, bullied the dissenters, demonized the opposition and have never admitted failure. It’s why 20 years after Vietnam some of the military industrial complex that was gung-ho at the time could admit it was a folly doomed to fail, but the real hardcore continued to believe we could have won if only the military was allowed to. The worst of them pointed to our nukes and said, why do we have ’em if we’re not gonna use ’em? Like General Jack D. Ripper in “Dr. Strangelove,” the unthinkable isn’t only thinkable, it’s the best damn option we have to protect “the purity and essence of our natural fluids.” Such people in real life should never be allowed near the levers of power, but the dickens keep getting there.

Today, hardliners push for war with Iran, willfully ignoring the hard learned lessons of literally every Middle-Eastern intervention as well as our misadventures in Southeast Asia. Whether in Tel Aviv or the Beltway they only see one way to keep Iran in line and that is by the fist and the sword. It’s a frankly panicky and poorly thought out plan of action anchored down by an ethos that says negotiating is for the weak, admitting wrongness is for the weak, admitting weakness is for the weak. And of course the weak will get us all killed. The atavistic tribalism that always follows from such thinking created the American right wing victory lap after Netanyahu’s electoral victory. Take that Obama!

The biggest problem for liberals/progressives is that, as the negotiators in this and every scenario, we’re always trying to talk our way around the people who want to just conquer us and make us go away. Over recent history our successes have come when the conservatives commit “gaffes,” what the Beltway calls it when they reveal their real feelings, intentions and blunt brutality.

When they hide successfully, like the iron fist in the velvet glove, they are more successful in pushing their agenda because of the simplicity of their messages. In a political environment that says “when you’re explaining, you’re losing” the more thoughtful and complex message always feels defensive. It’s easy to beat a robotic plutocrat who claims 47% of the country refuses to take responsibility for themselves. How said robotic plutocrat with but one term as a governor as his entire resume of public service got to the lofty position of GOP nominee for president is evidence of a real diminution of that party’s standards.

The managerial class that used to be the heart of that party have been replaced by the ideological true believers weened on hate radio and the echo chamber, rooting irrationally for the red team to destroy the blue team in an ideological Thunderdome. Any hope that the fever will break and sanity will be restored when X happens is a pipe dream. Our present system of extreme liberalism towards the distribution of money in politics and extreme partisanism in gerrymandering means every 4 years the most wild-eyed anti-compromise extremists will be rewarded as the polity stays home when a president isn’t on the ballot.

Any impulse towards public service is perversely demented towards the effort to curb the positive ability of government to effect people’s lives. Railing against government while interviewing for a government job is how bizarro its become. Then in office they hypocritically use the government they rail against in order to push agendas that only their hardcore fellow team members approve of. They didn’t really hide their agenda during the election, they just kind of glossed over it while sending dogwhistles to the faithful. So a bunch of big government hating conservatives enact hundreds of incredibly invasive laws that hamstring women’s healthcare providers in order to make abortion less legal, less safe, but more rare, along with pap smears, mammograms, family planning, etc. If fetuses had guns there’d be no abortions becomes a non-ironic bumper sticker.

I would love to believe that “the fever will break” eventually, as the core Fox News watching, Limbaugh listening, GOP primary voting demographic fades away naturally due to their average advanced age. But despite the polls that show younger people more in line with classic pluralistic values, somehow as they age some portion of the negotiators become enamored with power and fall into the trap of the simple logic of the conquerors. The fallacy of the saying “if you’re a conservative when you’re young you have no heart, if you’re a liberal when you’re old you have no brain” gets repeated in order to justify having been a thinking feeling person and then saying, “nah, I’ve been thinking and feeling for too long, no more of that weakness.”

30 years of right wing talk radio, Fox News and the dumbing down of the GOP from a white, male, Wall Street, managerial oriented party to a white, male, loony bin, grifter oriented party has brought us to this. But I will reiterate that the media are almost as at fault for one of our two major parties descending into madness as the responsible leaders and statesmen of the GOP who let it happen. If at any time the mainstream media had sounded alarm bells about how wacko the GOP was becoming and if the credibility of Fox News and the increasingly sanity averse Republicans had been taken to task in any real way instead of invoking the bullshit of “both sides do it”, maybe we wouldn’t be here… but we are.

Yes, ma’am, he’s a communist dictator, he’s not a citizen, he’s destroying the country, he tried to nuke Charleston, SC. We all know these things. The nuked Charleston is apparently from conspiracy theorist nutbag Alex Jones.

Of course, Rick Santorum wasn’t going to correct any of these blatherings. Little did we know that when John McCain did set a crazy old lady straight in 2008, that was the last time any Republican would act responsibly with a deluded member of the public. So now you have about 25% of the country who would agree with most (if not all) of what this woman spews here.

The NY Times printed an OpEd by a Texan who actually understands the world around him. How Drought is Producing Tensions in Texas describes the race to the bottom of the well that is the American Southwest. I know I go on about this and it’s my bugaboo, but it’s only because I like water. Drinking it, bathing in it, how it helps things grow, the whole package is pretty amazing and science says it’s kinda essential to life. So when you know about the history of the region and the draining of the aquifers, the long standing droughts, profound water shortages and desperate plans to divert water from wherever they can get it, in light of:

Then there is the Southwest’s never-ending population boom. Texas is home to four of the 10 fastest-growing cities in the United States. Expanding cities like Phoenix, Tucson and Las Vegas are exhausting Lake Meade — and eyeballing aquifers and pipelines from other states. Californians are preparing that most expensive solution of all: desalinating water from the Pacific Ocean.

Yeah, people are oblivious to this stuff and they keep moving to places that have no natural water. To them, water comes in plastic bottles at the Ralphs, so why are you getting so upset? There’ll always be water.

There doesn’t have to be.

Nobody thought it was possible. This is what the Heartland Institute and the hardcore Know Nothings fear most – we actually got CO2 emissions flat at the same time that our economy grew. We’ve had downturns in CO2 but they usually go along with an economic downturn. People’s actions to mitigate carbon use are actually counting for something. It’s not enough, and not fast enough, but it’s in the right direction and it’s evidence that the doom and gloom warnings of the death of capitalism that the deniers claim will occur if we act to save our planet is not a thing. We can be smart and capitalist apparently. Whoda thunk it?

The IEA attributes this remarkable occurrence to “changing patterns of energy consumption in China and OECD countries.” As we reported last month, China cut its coal consumption 2.9 percent in 2014, the first drop this century. China is aggressively embracing energy efficiency, expanding clean energy, and shuttering the dirtiest power plants to meet its planned 2020 (or sooner) peak in coal use. As a result, Chinese CO2 emissions dropped 1 percent in 2014 even as their economy grew by 7.4 percent.

China is taking action, so if someone says, we can’t because China won’t, smack ’em hard.