as the end of the Republican Party.

Make no mistake it was 30 plus years in the making, but March 1, 2016 may be the day that politics wonks remember as the exact moment that the craziness that has co-opted the party for years, finally transcended to complete national lunacy, ending the Grand Old Party (which was younger than the Democratic Party, by the way, by between 35-50 years).

I’ve been predicting and rooting for a party ending schism for years.  Years, I tells ya! But it’s finally here as Donald J. Trump will emerge tonight as the presumptive nominee of the Republican Party for the presidency of the United States of America.

The last week has been so enjoyable for Marco Rubio’s ridiculously belated realization that he should grow a pair and ridicule Trump right back. It sounds like he hired writers that used to work for Friar’s Club roasts (dick jokes on the campaign trail!), so it’s both so unpresidential and six months too late.  If you can now refrain from disavowing the KKK and still be nominated, you cannot any longer say the GOP is in standard operating procedure.

Josh Marshall makes the case, that I believe is incontrovertible, that it’s not a Trump problem it’s a  Republican voter problem and that took decades to create.

This crystallized for me after the last GOP debate when Trump told Chris Cuomo in a post-debate interview that the IRS might be coming after him because he’s a “strong Christian.” Set aside for the moment how this unchurched libertine was able to rebrand himself as a “strong Christian.” What about the preposterous claim that he is being persecuted by the IRS because he is a devout member of the country’s dominant religion? Republicans simply aren’t in any position to criticize this ludicrous claim because they have spent years telling their voters that this sort of thing happens all the time – to Christians, conservatives, everyone the liberals at the IRS hate. And this, of course, is just one example of hate and nonsense debt coming due. Shift gears now and they’re “RINOs.”

The media and the head up their ass GOPers may want to believe that this is a one-off situation, may even try to convince people that this is all Obama’s fault, but all evidence is to the contrary and the party’s embrace of a fact free lifestyle bereft of statesmanship, bipartisanship or just the simple responsibility of governing has created a conservative Republican primary voting base that is bat shit crazy.

One republican commentator said that Trump’s rise was because the Republican base was “asked to give them a Republican House, they did and they got nothing for it, and asked to give them a Republican Senate, they did and got nothing for it.” It begs the question: WHAT THE HELL DID THEY WANT?  Shut down the government entirely? End all taxation? Criminalize the Democratic Party? Ban solar power and announce an all coal energy strategy? Finally, on the 64th attempt, get Obama to sign an Obamacare ban?

What on Earth do they want from government, the entity they decry as ineffectual and inefficient and should be small enough to drown in a bathtub? Did they imagine a complete reversal of the 20th century? A dismantling of all government down to a libertarian paradise with 100% gentleman public servants who only go to Washington 2 weeks out of the year just to make sure that nothing inappropriate has been foisted on the American people?  I am sincerely puzzled as to what they want, or what they imagine is doable to shrink a government of 310,000,000 people, while still keeping government hands of their Medicare.

Seems to me that mostly these people who revere the Constitution and it’s Founding Fathers are the ideological progeny of the anti-federalist faction in 1788 that voted against ratifying the Constitution. They thought the failing loose confederation of states created by the Articles of Confederation was working just fine and any accrual of power by a stronger federal government, like taxing power of any type, was to lead to tyranny. So these GOPers are not just 228 years too late, they’re also completely misinformed on the subjects of American history, the Constitution, the Founding Fathers and what we used to call civics.

All Trump’s done is take the actual GOP issue package, turn it up to eleven and put it on a high speed collision course with RNC headquarters smack in the middle of presidential election year.

Like everyone within ear shot of a spoiled child having a melt down in the aisles of a supermarket, Americans have had their peace, lives and prospects diminished by these poorly educated people. 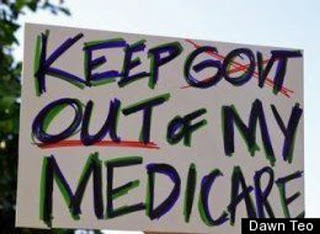 But Trump loves the poorly educated.