Normally I would go along with the conventional wisdom (which is almost always unwise) and say a national head to head poll this far out is as useless as a first quarter NBA score. But… I don’t believe I’ve ever seen a more followed, discussed and engaged primary process as this 2016 cycle.  Everybody seems to know who is running and has an opinion, already. So in this unique case I am willing to look at this initial poll of Trump v. Clinton as really, truly (but not officially) the presumptive nominees as having some credible significance.  And it’s pretty much what you’d expect. Clinton 45.9% to Trump 38.6%.

Eventually Clinton will get over 50% and Trump will get over 40% as the sides solidify, but the 7 point spread seems to me pretty close to what we’ll end up with next November. 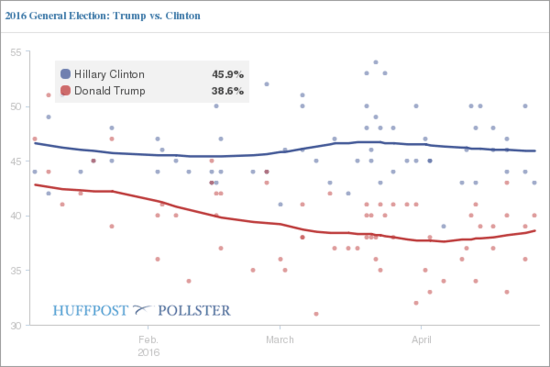 Many very smart people will claim all along that it’ll be another close election that comes down to the wire like 2008 and 2012.  They will be both inaccurate in their memory and prognostication.  Both 2008 and 2012 were fully baked by October and 6 points is really not that close (at least by our polarized national standards).  As awful as Trump is, I think people are right that it won’t be a landslide.  It’ll be between 7-10 points and that is huge. That alone can deliver the Senate to the Dems and put significant gains in the House in reach.