David Chang’s Momofuko Nishi sells a bleeding veggie burger by Impossible Foods. They added a molecule to the usual non-meat ingredients that make the damn thing seem really meat-like and even “bloody.”  Going to go taste that Impossible Burger today, I’ll let you know (see below picture for update).

By the way, Chang has a new restaurant at Citifield this year, very disappointing.  Chicken sandwich was tiny and uninspired and the fries were way too spicy.  Expected more.

Spoke to a vegan yesterday who said the Impossible Burger would still be a problem for her because it approximates meat texture and bloodiness, even though it’s not at all, you know, meat.  So it’s true, some vegans eat that way because they don’t want to eat food that tastes good. It all makes sense suddenly. 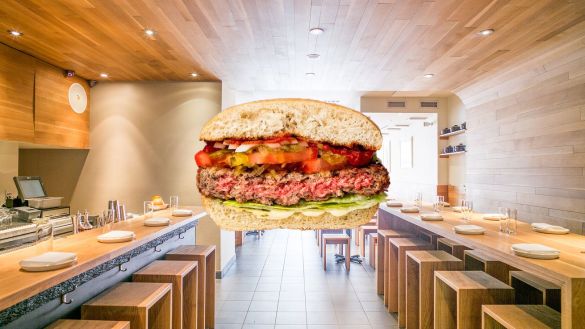 UPDATE:  Good!  Very good!  Interesting experience because it felt like eating the future (note to self: I should trademark that phrase and sell it to them).  Bottom line is if they served this at Shake Shack I probably wouldn’t know the difference.

They open at noon and there was a line already when I got there at 11:45.  It’s a fairly small restaurant and almost everybody there was there for the Impossible Burger.  The Waiter alarmed us when he took the order when he asked if we wanted cheese and advised “It’s better with cheese.”  But really, it’s not like the cheese disguised the fact that it was a veggie burger.  Maybe the mouth feel of the cheese helps, but we both ate pieces of the “meat” alone and decided that it felt and tasted very much like beef.

I asked the Waiter if “rare, medium and well done apply?” and they don’t.  They’re all cooked the same, which is sure great for the chef!

Really quite amazing.  The question is when it spreads out to more restaurants and becomes available for retail sale.  Obviously there are companies trying hard to create artificial meat through DNA, but I can’t imagine they’ll make anything much better than this.