As I noted just yesterday they’re entirely responsible for the existence of the ACA (aka Obamacare) because the only viable healthcare program that could get passed (so we’re told) is a market-based Rube Goldberg contraption that had the imprimatur of the hospital industry, the pharmaceutical industry, the insurance industry, etc.

But because politics has become stupid and vicious they opposed it all turns, made up stuff about it (death panels, thanks Sarah Palin!), and demonized it to their followers so that people on it, in the exchanges or benefiting from the Medicaid expansion or other provisions, voted for politicians vowing to kill it.

They’ve repeated that it’s a job killer (it isn’t) and a disaster (not even close).  Watch Ali Velshi shut a Republican up with the actual stats.  Actually people are happy with it despite all of the propaganda. 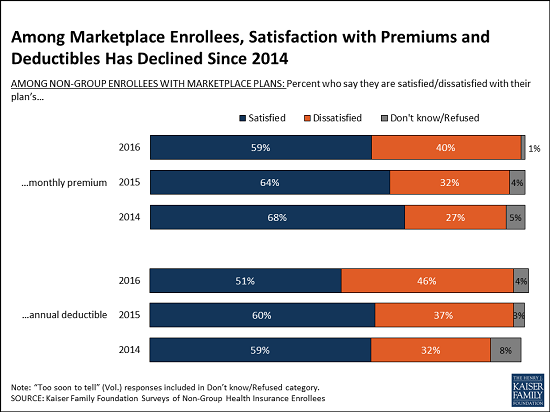 However, if you actually talk to those voters you get a different story that would shock the pants off their GOP manipulators.

On the less serious side when TN Congresswoman Marcia Blackburn went to twitter with a poll she got non-scientific (granted) but surprising results.

Do you support the repeal of Obamacare? RT if you do, and share what you want to see as the replacement.

The scientific polling behind that though was done by the Kaiser Family Foundation that did focus groups with Trump voters.

They expressed animosity for drug and insurance companies, and sounded as much like Bernie Sanders supporters as Trump voters. One man in Pennsylvania with Type 1 diabetes reported making frequent trips to Eastern Europe to purchase insulin at one-tenth the cost he paid here.

The Trump voters in our focus groups were representative of people who had not fared as well. Several described their frustration with being forced to change plans annually to keep premiums down, losing their doctors in the process. But asked about policies found in several Republican plans to replace the Affordable Care Act — including a tax credit to help defray the cost of premiums, a tax-preferred savings account and a large deductible typical of catastrophic coverage — several of these Trump voters recoiled, calling such proposals “not insurance at all.” One of those plans has been proposed by Representative Tom Price, Mr. Trump’s nominee to be secretary of Health and Human Services. These voters said they did not understand health savings accounts and displayed skepticism about the concept.

When told Mr. Trump might embrace a plan that included these elements, and particularly very high deductibles, they expressed disbelief… But most did not think that, as one participant put it, “a smart businessman like Trump would let that happen.”

The GOP has been playing with fire with this all along.  But they’ve gotten away with it because they’re master propagandists.  But propaganda won’t help you when you actually hurt people – they tend to be propaganda proof at that point.