Hat tip to Atrios on this theme. Years ago there was a poll that asked people about their economic condition and it turned out that 19% of the American public thought they were in the top 1%.  I guess this was at a real high point of optimism but the greater point is that it’s really true and really a problem that Americans don’t have a clear idea of their place in the world, economics, what other people have, what the government does, etc.

Over and over again people think that our government spends upwards of 40% of our budget on foreign aid when it’s less than 1%.

And maybe the most problematic and mind boggling of all:

“They’re not going to bail me out,” Nelson said. “I’ve been on food stamps and welfare. Anybody help me out? No. No.”

Yes, many Americans do not know that food stamps and welfare are government programs, not just sitcom actors like Craig T. Nelson, and how is that even possible?  The downside is pretty obvious: it’s really easy to vote to get rid of government benefits when you don’t realize what you and your neighbors are receiving are government benefits. Only those people get those, not me, so screw them is human nature (sadly).  If people had a more realistic, more informed outlook it would be better for us all.  How many people in 2016 voted to eliminate that devil Obamacare when they were receiving benefits under the wonderful Affordable Care Act? 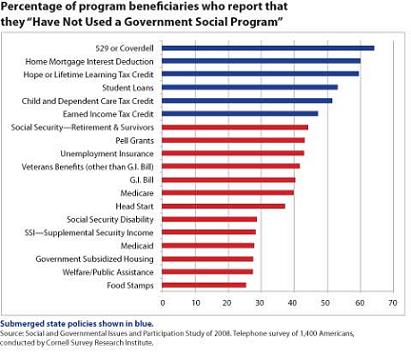 I will come back to civics.  Put kids in civics classes starting 4th grade all the way through High School.  Learn how everything works, local, state and federal government as well as American history.  Show people how to write letters to their representatives, what a budget is, what their taxes buy, etc.

That alone could change everything.  Maybe make it a little less f’d up.

Maybe I should run for school board.  Or if I become a billionaire I could run the whole Dept. of Edumacation!