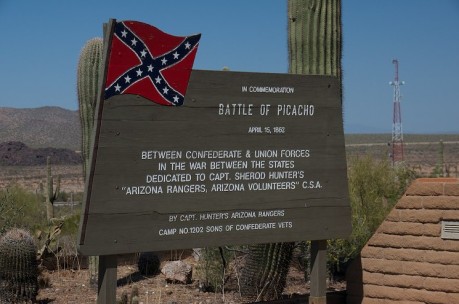 John McCain sounded absolutely loopy yesterday, so there’s that.  On the other hand the Goldwater state is getting purpler every day.  But this shit is crazy.

During the Civil War some Southerners  went to Arizona and declared the southern part of the territory part of the Confederacy.  Okay, whatever.  That was then.  Later on, much later on…

It wasn’t until the mid-1950s that Confederate heritage groups became a significant presence in Arizona, which Stoutamire attributes to the state’s population boom during that era.

“As thousands of Southerners moved to a drier climate, they brought with them an identity grounded in the constant presence of Confederate symbols,” he writes. “Confronted with Arizona’s secessionist history, they felt the need to memorialize and commemorate the Confederacy’s attempted extension into the Southwest.”

It’s only then that they started putting up memorials to a treasonous war effort ignominiously put down 100 years earlier, you know, for heritage!  Yeah that’s it, heritage!

That shit has got to go!  How did the northern snow birds let the southern expats who moved west to escape Alabama’s humidity get away with that crap?  I know.  The kind of people I knew from Long Island and New Jersey who went to Arizona to retire and desiccate didn’t give a crap about the south, but they weren’t exactly freedom riders either.  They thought they were trading the encroachment of black people into their color free suburbs for those friendly southwestern brown people.