Which is all a shame, of course.  I wanted to have a great time and love Cuba.  I could not. 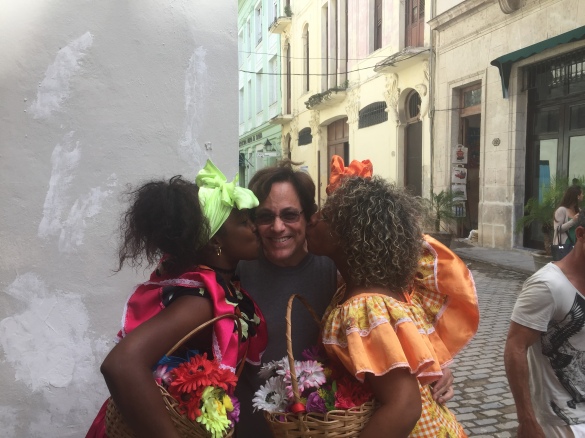 These two felons troll one of the squares in Old Havana in their native garb and charge New York prices for their “service.”  It was our last morning before extraction and we were doing our final shopping excursion for souvenirs.  These women approached us and bum rushed us into photos.  I figured, “what could they want, a couple of pesos, it’s all in fun.”  After we took the three pictures they asked for 10 CUC (convertible pesos, even the money is complicated) per picture.  I laughed, thought, “okay, you got a New Yorker – kudos ladies, kudos!”  I took out 40 CUC, they grabbed it, smiled and walked away.   Thieves!

Thank goodness I had to get rid of that stupid money anyway.   One of the women had a pronounced moustache.  Thief with a moustache!

The people that we met that were wonderful all had sad stories about how they would like to be able to leave to have opportunity.  Our guide around the town one day, Sr. Luis Flanagan (I shit you not, his grandather was Irish and the man’s face looked like it would have fit right in in a bar in Queens, backing up his claim) had spent 8 years in prison for trying to cross the Gulf of Mexico to Florida.  A wonderful musician we met through the music festival we were there to attend was heartbreaking in his plea for help to get a scholarship to an American school so he may be able to study the music he loves in America.  The three most common things we heard from Cubans was:

Everybody, no matter how much they bemoan the present government has their favorite revolutionary.  Mostly Che.  But also Camilo Cienfuegos, one of the big three leaders of the revolution that we Americans have never heard of because he died in a mysterious plane crash in 1959.  Luis Flanagan claims Cienfuegos is still alive and living in Florida because he would not go along with the direction of the revolution he saw Che and Fidel taking it.  People here will tell you that the original evolution was a true people’s revolution.  It was only after America turned its back on Cuba that the Soviets stepped in and everything went south.  History backs up that version.

Nobody likes the Castros.  Understandable.  Fidel had to actually run the country and wore out his welcome.  If he had died in 1967 and Che had run the country into the ground Fidel’s likeness would be hung from every taxi rear view mirror today.

The food was uniformly lacking.  We had a couple of okay meals, but in general the food was disappointing and of low quality even in nice places.  Articles warn you to stay away from the street food and government run restaurants because they get the worst quality ingredients, understood.  One morning we went to one of the big hotels to get breakfast because that was the most problematic meal.  (In all of Havana there was no such thing as a breakfast place, a bakery, a coffee shop where you could get a to-go cup of coffee and a pastry, or an egg sandwich, anything remotely breakfasty.  There is no walking around with a cup of coffee.  It doesn’t exist.  Again, ponder a country where there is no such thing as a cup of coffee to go, or a cup of coffee more than 3 ounces.  If you add up every cup of coffee I drank in country over 4 days it probably didn’t add up to one single Starbucks grande.  This may seem petty, but it goes to quality of life.)  So we went to a big hotel thinking they must have a breakfast situation that an American or European would recognize.  For 22 CUC (expensive) there was a buffet breakfast that we indulged in.  But even there at this large, central hotel that would be getting the best provisions the government can offer, the meal was unsatisfying.  They passed off a stale roll with some sugar on it as a doughnut (seriously).  They promised boxes of American cereals, but those boxes were just props, there were no Fruit Loops or Frosted Flakes.  The fruit they offered was wan and unsweet.  Shouldn’t Cuba be able to grow decent pineapples and watermelons?  You would think.  They can’t.

But the biggest offense was just the sense of discomfort because of sanitation issues, a pervasive bad smell in the streets (and in our apartment) and a lack of creature comforts like, say toilet paper.

Our apartment ran out of toilet paper sending us on a city-wide search for that same simple product of fairly common provenance, elsewhere anyway.  For 24 hours we went into every store and asked but they did not have any toilet paper.  We would ask anyone we could grab on the street where we could procure some fucking toilet paper and they would say they didn’t know.  “Do they not use toilet paper?” we started to wonder.

We grabbed toilet paper from the better public facilities that had it (although not all do, and some have no seats as well, to be covered later).  It’s hard to express how what should be a pleasant trip can be ruined by uncertainty about something as simple as toilet paper.

Our travails over toilet paper ended when the apartment’s housekeeper came and restocked our bathrooms.  Relief, literally!  Then a few hours later our water supply stopped.  Toilet paper, but non-functioning toilets.  Frustrating!

About those charming old cars.  They’re there.  We rode in a Studebaker. And spent a day travelling outside of Havana in a 1952 Ford miraculously still on the road.

Not one of these cars is equipped with a simple seat belt.  Ralph Nader would have hated it there.  There are also many motorcycles and I think I saw one legitimate helmet over 4 days.  Mostly Cuban bikers wear the equivalent of the leather helmets worn in the 1929 Yale/Harvard football game.

There are plenty of newer cars too.  My first trip from Jose Marti airport was a disappointing commute in a 2015 Audi.  I saw Audis, Hyundais, Toyotas, Nissans, and some off brand cars too – the Geely and other Chinese made cars and some Soviet made cars too.  All in all the cars, trucks and busses belched nasty diesel fumes everywhere.

I was awakened by a rooster at 6:00AM one morning.  In Havana.

Our day trip to Vinelas, a rural valley three hours from Havana was very interesting.  It was indeed odd to be travelling on highways sharing the road with horse drawn buggies like one huge Amish country.  The sight of horse drawn buggies on the highways was only eclipsed in oddity by the sheer numbers of people standing by the sides of the highway hitchhiking.  Entire families looking for a ride by the side of the highway.   Also unfamiliar was the number of apparently stray animals both in the city and in the country.  Havana is full of cats and dogs that just wander the streets, shitting.  They have no pooper scooper laws there and it wouldn’t help because we saw very few animals actually on leashes.  On the plus side we didn’t see any mice or rats in Havana – it must be the cats.  (Although we did see two dead bird larcasses in the street, no explanation for that.) When you leave Havana you see stray dogs, cats and horses.  Even the farm animals are just there on the side of the road, cattle, goats and horses, grazing with no apparent owners around.  In Vinelas you can add chickens to the mix.  Chickens (of many breeds) were everywhere mixing with the cats and dogs.  Here’s a sample of that.  Cats, chickens and dogs coexisting peacefully.

By the way, everybody I asked about race relations said there were no problems.  Cubans run the gamut from black to white and every shade in between and they claim there are no race issues.  That was cool.  Also, it should be noted as a massive plus that everywhere we went people felt safe at all hours of the day and night.  There were few police and most were unarmed.  You see soldiers in uniforms throughout the country, but they are unarmed.

Back to bathrooms because that ultimately was the straw that broke the shitting camel’s back.  Besides our problems in our apartment there were persistent break downs in public as well.  The below three toilets were sitting outside a public bathroom at a rest stop on the road outside Havana.  I told my travelling companions that that was the public toilet and for a moment they believed me.  That’s how bad it is. 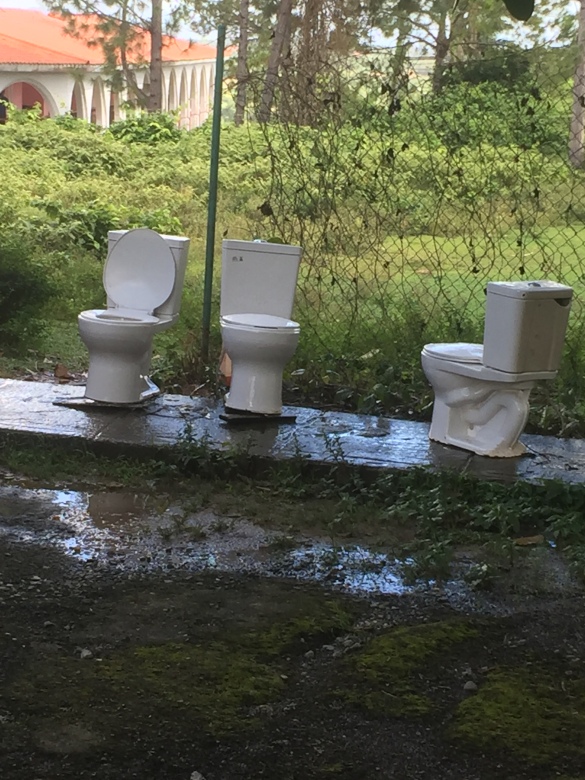 At that same rest stop I approached the actual men’s room and saw the female attendant outside drop a roll of toilet paper on the not very clean floor.  I kept going inside and saw that there was no paper inside the stall.  She handed me the roll that she had just picked up off the floor.  O-kay.

In another instance a bathroom at a well travelled tourist site had no seat.  Ladies, how is your hovering technique?

In a very nice building, where they were holding a reception for the music festival we were attending, a lovely function with great live music, the men’s room toilet had no seat and the top of the tank was a piece of cardboard from a box of local beer.  The sink in that bathroom was a virtual art installation because it did not have running water or a faucet or handles.  Just an inert, useless piece of porcelain sticking out of the wall.

The final, final, final straw was in our waterless apartment on the morning of extraction.  There was a persistent bad odor in the apartment that just haunted me everytime we came back to it.  I finally figured out what it was that last morning.  In the kitchen was a sugar bowl, a bowl of salt and bowl of coffee, provided for the guests to use, I guess.  Each of those containers had tops on them.  In addition to the sugar, salt and coffee was a small cruet of oil, which was open to the air.  The oil inside was rancid and there was a layer of flies at the top.

That smell  had so permeated my clothes that everything I brought to Cuba went right into the laundry upon return.  I even cleaned my shoes with Clorox when I returned because the streets were so third world dirty.

And that’s the bottom line about Cuba.  It is a decidedly third world country without the mitigating force of capitalism that would make a tourist’s experience any better than the average citizen.  In that way they have achieved the equality espoused by the revolution.  Whether citizen or tourist you will cry, despair and hope to leave.