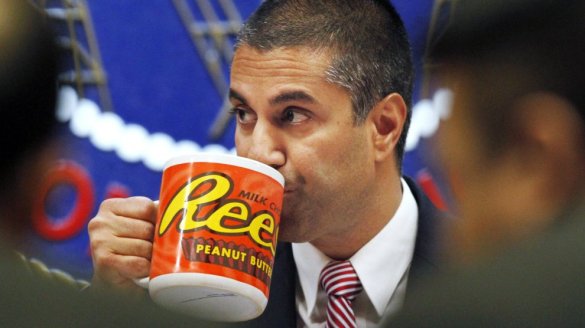 Mother Jones with the details of his cavorting with a Pizzagate hussy and other typical conservative rudeness.

Pai mocked her remarks. “Thank you Commissioner Clyburn. I’m going to mark you down as a ‘no’ then?” he said, laughing.

Pai is the kind of conservative/libertarian dick that carries his arrogance around in an extra large man purse in order to smack people with it whenever he feels appropriate.  None of his legal or economic assumptions have been proven right, but in his head he’s never been wrong.  His theories are iron clad, but sometimes the world fails him, which only proves his theory… somehow.

But Pai is till not a bigger dick than Donald Trump Jr., who either didn’t know that his father appointed Pai or pretended that wasn’t reality.

First, You misspelled #NetNeutrality, you genetically altered butternut squash. Second, you don't know the value of a dollar, you silver-spoon snickerdoodle. Third, sunshine, Reaganomics is like DeLorean. It was sexy in the 80s, but I didn't work then and much less now.