Constant talk about his Republican base who just didn’t even need to take his advice to not believe what they read and hear (except from him), they’ve been doing that already for years.  Whether it’s Rush Limbaugh or Fox News or Breitbart, they’ve been deaf, dumb and blind to anything but the insane blatherings of right wing nutjobs forever.

But they do not matter!  Write that 100 times (Nixon said on his tapes to write that “The press is the enemy” 100 times.)

His high 30% to low 40% approval ratings are shallow polling.  Go deeper and his re-elect number dips to the low 30s and even lower!   A not insignificant segment of the minority who say they approve say they do not want him reelected.

The proviso with this is that while he suffers when you take away the Hillary figure to compare him against, there will be a Democrat in 2020 and yes, some of those that regret his election may come back to him in comparison to whatever Democrat is the nominee.  But 30% reelect is exceptionally soft.

And this is redounding to 2018 as well.  The Marist poll shows this.

The poll indicated that 28 per cent of registered voters in Michigan, a state Mr Trump flipped from his Democrat rivals in the 2016 presidential election, said he deserved a second term…. In Minnesota, a state Mr Trump lost to Hillary Clinton by fewer than two percentage points in 2016, roughly 30 per cent of voters surveyed said the US leader deserved another go-around in the Oval Office… Thirty-one per cent of voters in Wisconsin are in favour of a second term for Mr Trump…

His under water national approval ratings are actually buoyed by the south and every really red state where he’s still very popular.  But in bluer and yes, purpler places where independents make the difference, he’s decidedly unpopular.  This rejection of his persistent dishonesty and asinine policies will help Democrats move district after district to a couple of points better performance than they would have.  This is likely just a continuation of the 20-30 point blue swing we’ve seen in special elections since Nov. 2016.

Trump’s even bigger betrayal than his full embrace of Putin’s proto-fascism is his Orwellian abandonment of those forgotten Midwestern working people.

Trump campaigned on “Make America Great Again” but he’s already pivoted to calling America great now.  And his 2020 campaign slogan is ‘Keep America Great”.  Now if you ask those unemployed or underemployed people who thought he was going to save their factories, their towns, their farms, etc. and have seen the status quo remain very quo, if not actually get worse, they’d be pretty puzzled to hear that America is already great.

During the campaign he derided the pretty good unemployment statistics from the Labor Dept. as fake news.  Now he claims to take credit because they’ve continued their 8 year trend towards full employment.  Most people not in his blinkered base see this.

They see the Chinese workers already making his reelection swag. How is this not  a bigger story for a president in a trade war?? 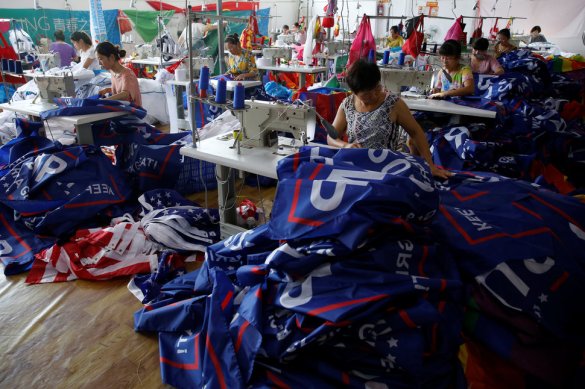 The people who gave him the benefit of the doubt are feeling betrayed.  They’ve heard the lies, seen things get worse, seen his dismal trade war and the shake down he’s proposing to pay them or their neighbors off.  It’s pretty reminiscent of Mafia tactics to create a problem with your trade war and then propose to step in and help like some two-bit leg breaker promising protection after smashing your windows.