It’s been a few days since we talked about abortion and while that should be a good thing, let’s just take a looksee at David Leonhardt’s NYT piece about Public Opinion on Abortion, Few Absolutes. It’s worth internalizing the several poll charts.

Now my emphasis is on how many people share the opinions of the most extreme anti-choicers who would, if they could, completely ban legal abortion wherever they could and send us back to a pre-Roe status of states that allow with restrictions and states that do not allow under any circumstances. The thing that I always come back to is that what Roe did, more than anything, is democratize abortion rights. Women with resources always had choices, could get on a plane if necessary to find safe options. It was women without resources that had to either go through with an unwanted pregnancy or resort to illegal and dangerous methods. 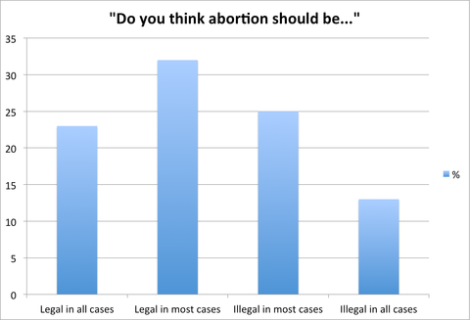 So 87% believe there should be at least some access to abortion and only 13% want complete bans.

So here in 2013 Gallup finds 20% want total restriction. So across several polls the extreme anti-choicers come in, very much like the tea party, at between 15-25%. A significant section, but clearly a minority of the country.  The 13% that Pew finds today against all abortions is similar to Gallup’s all time low in the early 90s.  The numbers are remarkably steady.

And yet over the last 10 years we’ve seen unprecedented assaults on abortion rights and access, including the legal end runs on abortion represented by “personhood” laws that have changed the status of a fetus to a “person” with rights for the stated purposes of charging the killers of pregnant women with two homicides. These laws have been used to change the debate on viability and then somehow insinuate themselves and the assertion of fetal rights (now in conflict with the mother’s rights) into abortion debates backing up the rhetoric of those who consider all abortions “murder”. They’ve been especially used in the late term and so-called “partial birth” procedure debates to further erode access to those scary sounding, but medically sound, procedures even when medically necessary.

In short, the complex and conflicting issues and emotions incumbent in abortion have been effectively exploited by the anti-choicers to push their agenda way further than it should ever go in law.  This comment to the Leonhardt piece by Katha Pollitt of the Nation is the best takeaway to clarify Roe and what the debate should be:

Thanks for this close look at the polls, Nate, but if I read you correctly, you’ve misstated what Roe says. Roe explicitly stated that in the second trimester abortion could be regulated by the state only to protect the woman’s life and health, not to restrict abortion per se. In other words, a state could insist that second-trimester abortions had to be performed in a hospital (rather than, say, a doctor’s office) if that was necessary to protect the woman’s health and safety. But the state could not restrict abortion itself (accepting only certain reasons for a second-trimester abortion, for example). Roe was very concerned with abortion as a medical procedure and with doctors’ rights to care for their patients without having to worry about legal consequences. The part permitting increased medical precautions in the second-trimester was in line with thi concern. it had nothing to do with thinking that a 16- week old fetus had rights that a 10 week old fetus did not.

It was only in the third trimester (roughly, viability, as it seemed in 1973) that Roe permitted a state to ban abortion except when a woman’s life and health were threatened.

Given the enormous number of illegal abortions before Roe (which was one of the reasons why Roe seemed like a good idea to 7 middle-aged to elderly Protestant gentlemen on the SC), I often wonder what people who want to restrict or ban abortion imagine will happen if abortion once again is banned or restricted.

Connie Schultz notes the puzzlement that she gets from average people about the GOP’s wacky abortion fetish.

I was a bit surprised when the Q & A portion of our program turned so quickly to women’s reproductive rights, as in: Why are Republicans still screwing around with them?

I expect such spirited discussions in big cities and even midsize towns, but until recently, I wasn’t on the receiving end of this righteous indignation in places such as rural Ohio.

It’s not that they’re all suddenly pro-choice; it’s more that they’re feeling forced to declare themselves pro-woman. Despite the election defeats in 2012, the majority of Republican legislators apparently still think it’s a good idea to rally the worst among us — they call them their “base” — by trafficking in superstition, misogyny and outright lies to endanger the lives of our daughters. Hence, we have the U.S. House of Representatives’ latest, most extreme anti-abortion bill — called, in the absence of scientific proof, the Pain-Capable Unborn Child Protection Act — which is bound to go nowhere.

This remembrance from her days as editor of her college newspaper made me laugh out loud:

We decided on several front pages to the topic. It was a birth control extravaganza, complete with diagrams, photographs and detailed instructions on how to prevent unplanned pregnancies. For weeks, we were inundated with phone calls and letters, many from outraged parents who apparently believed that their children planned to spend their four years of college holed up like monks in their dorm rooms.

Thirty-four years later, I still recall one particular father’s call. “You listen here, young lady,” he shouted into the phone. “I will never let my daughter stick an IUD up her rectum.”

Today, he could be a Republican member of Congress.