David Cay Johnston reports that Corporate Tax Rates Plummet As Profits Soar and (yawn, ho hum) it’s no surprise is it? Hey, see Wall Street lately, doing pretty, pretty, pretty, pretty good. Yep. Those people by their pools in Greenwich, CT can get to their summer reading while the kids are in summer camp and relax. It’s all good.

For the vast majority of America’s 5.8 million corporations, profits soared in 2010 — up 53 percent compared to 2009 — when the recession official ended at mid-year. Despite skyrocketing profits, however, their corporate income tax bills actually shrank by $1.9 billion, or 2.6 percent.

Cue some pin-stripe suited Republican claiming that corporate taxes are too high and regulation and Obamacare are strangling business. Oh and we need to cut food stamps to balance the budget.

Profits way up, taxes down, is not what our myths about taxation lead us to expect. These figures show that the endlessly repeated claim that American corporations are overtaxed is bunk.

David Cay Johnston is right that Gabby Johnson is right. But in my authentic frontier gibberish I’d have said Fuck the GOP, Fuck the Corporations and Fuck Greenwich CT!

This one by Dylan Matthews is about how only one third of the charitable deduction, largely taken by the wealthiest people mind you, goes to help the poor in the U.S. This is tough to nail down so the information here is from 2005 and one would hope with the economic meltdown of 2008 and the explosion of need for the homeless and hungry that there was some corresponding increase in giving. 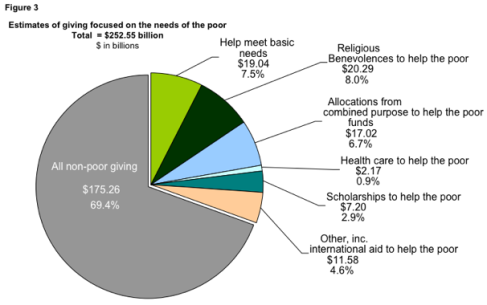 Now, maybe helping the poor isn’t the only, or even the main purpose of the charitable deduction. Maybe part of being a liberal society that tolerates a variety of religious traditions is giving religious people tax breaks on what they give to their churches. Maybe donations to higher educational institutions, even donations that are poorly disguised bribes to get the donors’ children admitted, are worth subsidizing.

Art too and music, very worthy.  What gets me is that even the richest of the rich don’t give more than about 1.5% of their after tax income to charity. That’s depressing. I’d like to think that if I had millions at my disposal I’d be dispensing more than 1.5% of it. Geez, at least round up to 2% richies!!

Also, The Tax Break State by Mike Konczal of the Roosevelt Institute examines who gets the tax expenditures (tax breaks) given out by Congress. No surprise, it’s overwhelmingly tilted to those stingy charity givers. 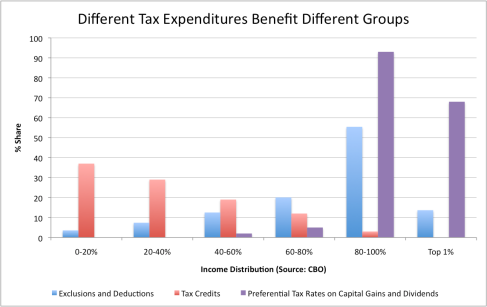 Luckily, the CBO released a major report this week breaking down tax expenditures (which is the boring, but more precise, term for tax breaks). Wonkblog’s Dylan Matthews already went through the major charts of the report (with other, slower Web sites catching up later). But to get a sense of the size and importance of these things, consider this: The top 10 tax expenditures total about $900 billion a year. Over half of them go to the top 20 percent of households. About a third go to the top 1 percent.

The easiest way to understand the tax break state is to think of it in three clusters: (1) tax credits that boost the earnings of those in the bottom half of the income distribution, (2) tax deductions and exclusions that boost the middle class and upper-middle class, and (3) the exclusion of capital gains and dividends from income taxation, which goes to the top 1 percent.

This, then, is the fight in American politics. Democrats want to expand the tax break state for the poor and cut it for the rich. Republicans want to keep it for the rich, or possibly use it to lower tax rates on the rich, but they’re uncomfortable with the part of the tax break state that benefits the poor. Although shrouded in arcane tax terminology, this is one of the most important battles over who will benefit from our economic progress, and how.

Chrystia Freeland in Reuters sums up the recent misogynistic stupid spasms coming from rich white males in Matriarchy, patriarchy and the masters of the universe. First there was this billionaire’s comments:

The sexist mores of the super-rich were exposed by one of that tribe’s most prominent philanthropists, the hedge fund billionaire Paul Tudor Jones. At an April symposium at the University of Virginia, Jones said that women didn’t trade as successfully as men because becoming a mother is a “killer” to professional focus. “You will never see as many great women investors or traders as men – period, end of story,” he said.

“As soon as that baby’s lips touched that girl’s bosom, forget it,” Jones said, describing the grim career impact of motherhood on two women who had worked with him in the late 1970s.

Yipes! Then you had the Pew Study that showed 40% of families have women as sole or primary breadwinner:

Contrast that positively Victorian setup with the latest news from Middle America: This week, the Pew Research Center reported that four in 10 families with children under the age of 18 are now headed by women who are the sole or primary breadwinners. Motherhood may be a “killer” when it comes to becoming a Master of the Universe, but among middle-class mothers, even after that touch of baby’s lips to bosom, a big and growing number find themselves able – and often required – to bring home the family bacon.

You had an all male Fox News panel have a nervous breakdown over that one and spew such testosterone driven drivel that fellow Foxer Megyn Kelly had to take them to the woodshed. (I would link to the video, but I cannot stomach having Erick Erickson’s face frozen on my blog forever).

The simple basic fact is that the stagnation of middle class wages has made feminists of middle class males because the last 30 years have forced families to embrace two paychecks, if possible. All things being equal (here’s to that), what man today would be so threatened and ungrateful as to resent the help paying the mortgage by a spouse that out earned him?

For so many families headed by women alone, what choice do they have? Are they supposed to wait for the “kindness” of some man to support them like a Tennessee Williams heroine? Holy shit what are these walking ball sacks thinking? It’s funny, I guess, to imagine that pure economics have dragged a lot of working class males into the 21st century while their better educated, upper class brethren are still dragging their Brooks Brothers clad knuckles.

As middle-class wages have stagnated, mothers have gone to work in increasing numbers to maintain their families’ standard of living. The Pew survey found that two-career households exacted a personal toll – 74 percent of adults said the increasing number of mothers working outside the home had made it harder to raise children, and half said it had put a strain on marriages. But a strong majority – two-thirds – said that working mothers had made it easier for their families to live comfortably.

To further the conversation that I started on May 22 with this post Good Times were fueled by government taxing and spending supporting a vibrant private sector I offer this chart that shows the diminution of corporate taxes as a percentage of federal revenue since 1950. That beige stripe that has narrowed over the last 60 years represents corporations and their shrinking contributions. Corporations do contribute about half of payroll taxes but overall their contribution is down from 32% in 1950 to 17% now while their profits have gone up exponentially. So much so that a company like Apple can have $102 billion parked offshore.

Individual taxes have increased from 45% to 63% although individual incomes have on the whole stagnated since 1970. 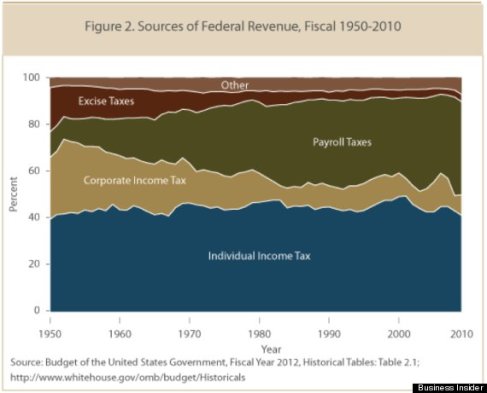 We all know when the good times were, we agree on that – Tea Party or Occupy Wall Street we all know that the post World War II years the 50s, the 60s, through the 70s, despite disco even, those were the “good times.”

Our parents could buy a house, a car, put the kids through college, go on vacation, all on one paycheck, Mom could even stay home and pack the school lunch in the Davy Crockett lunch box and they could do all that and still retire to Florida at 65.

But what most people don’t realize with all the talk about how taxes in this country just can’t be raised, no matter what, (they turned a three letter word into a four letter word) and everyone’s convinced they’re paying too much taxes is that from 1946 through the early 60s the top marginal tax rate varied from 82.1% to 91% (from 1951-64)!

They raised the top rates to pay for WWII, and after the war the to allay the debt.  But a funny thing happened.  The people who made over $400,000 (the top tax bracket in 1946 just like today which seems ridiculous in the age of billionaires, no?) millionaires said, we don’t mind paying, so they kept it.  They kept the top rate at 91% so the Rockefellers and DuPonts paid higher taxes, and corporations paid higher taxes too (top rate 25%, but fewer dodges available), at the same time that unions were at their peak and a full one third of the labor force of the country belonged to a union, driving up wages for everybody… and guess what we did during that period?

I mean we did all that and more and were the economic colossus of the world that grew and expanded and exploded with innovation and entrepreneurship and stuff that everyone around the world wanted.  And nobody, nobody said “I’m not going to invent something and get rich because the government is just going to take my money at 91%.”

Nobody ever turned down being rich because of taxes.

The real answers are:

3. Unions to lift the middle class.

Find the data.org has a great chart to find the top income tax and capital gains tax rates for each year since 1913.

This Business Insider article The History of Tax Rates is very cool, lots of charts.

Bloomberg figures the CEO to average worker pay ratios of the top 250 companies in the Standard & Poors 500 Index and safe to say some of them are eye fucking popping.

Across the Standard & Poor’s 500 Index of companies, the average multiple of CEO compensation to that of rank-and-file workers is 204, up 20 percent since 2009, the data show. The numbers are based on industry-specific estimates for worker compensation.

Check out the full list of the Top 250 that range from JC Penney’s 1,795 to #250 Agilent Technologies and their practically communistic CEO pay ratio of 173 to 1.

Wow, just wow! This is, essentially, how the new American aristocracy was created. No more President of the Company living in the same neighborhood with the employees like in a Capra film. Now the Boss has eight houses around the world and a private plane (paid for by the company) while the workers live in places the Boss wouldn’t go without hiring Blackwater bodyguards.

Notice how many of the worst offenders have average worker pay in the $20K range. $20 fucking K! While the CEO spends that on his dog walker.

If you thought tenements were bad. This just leaves me speechless.

The 67-year-old former butcher pays 1,300 Hong Kong dollars ($167) a month for one of about a dozen wire mesh cages resembling rabbit hutches crammed into a dilapidated apartment in a gritty, working-class West Kowloon neighborhood.

The cages, stacked on top of each other, measure 1.5 square meters (16 square feet). To keep bedbugs away, Leung and his roommates put thin pads, bamboo mats, even old linoleum on their cages’ wooden planks instead of mattresses.