Politico (Tiger Beat on the Potomac) reports that the WH is having solar panels installed – well, RE-installed! I’m sure they’re not the ones that were removed by Reagan, probably brand new ultra efficient panels, but it’s about time the 21st century energy source is utilized by the people’s house. 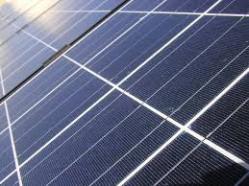 Absololutely every structure built in the United States of America in the year 2013 should have solar panels installed.

Of course, panels should have been on the WH all this time since 1979 when they were first installed. There have been solar panels AT the White House since 2003 when the Bush administration brought in some to heat water.

In 2003, solar photovoltaic panels were installed at the White House. Two smaller solar thermal systems were also installed to heat water: one for landscape maintenance personnel, the other for the presidential pool and spa….

The Bush Administration itself never really announced the project. Instead the installation was completed “under the radar;” industry trade journals were the media that picked up the story.

So typical. Bush’s people brought in panels because they were the right efficient tool for the job, but to do so openly, to announce it, would be treason to the cause of fundamentalist carbon defenders. I wonder if Cheney even knew.

This is all so curious because many scholars have observed a lag time of a generation or two in the adoption of the next new technological break through so that it seems as though the latest thing just happened, but in fact was in the works for as long as 50 years.

Steam power was begun in the 1770s, but took the world by storm and changed everything in the 1830s. Electricity, telephones and internal combustion were developed in the 1860s and 1870s, but didn’t really take off until the early 20th century.  Ground work for the information revolution and computers were laid in the 1940’s and 1950s, but it wasn’t until the 1980s that the technology began to be adopted on a widespread basis.

I’m convinced one of the reasons for this is that the soon to be anachronistic industries fight tooth and nail against their betters. And with that political power is arrayed against new technologies.

We’re seeing this with renewable energy even today!

Can you imagine how much further along we might be if those solar panels had stayed on the White House, had been adopted by Reagan, instead of scoffed at and removed to placate his oil and coal patrons?

If Reagan burns in hell for nothing else, his trashing of the last real comprehensive energy policy we’ve had in this country will be sufficient reason.

There are more solar energy workers in Texas than there are ranchers. In California, they outnumber actors, and nationwide, America has more solar workers than coal miners.

Check out the chart to see how many people in your state are employed in the solar industry making cheap, clean electricity.  And watch out for those solar spills!

Imagine if our government got out of the oil and coal business just how much progress we could make.